Home Christmas What do children leave out for Santa around the world? 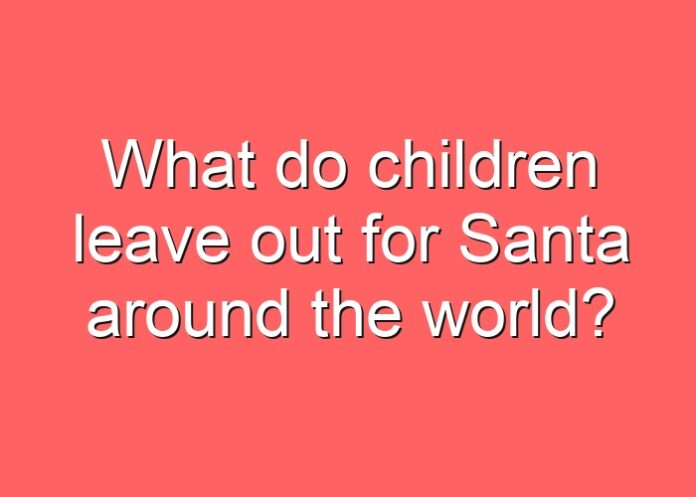 Santa Claus is a figure that has been around for centuries, and children leave out presents for him all over the world. The traditions vary from country to country, but most of them include sweets and fruits as well as toys.

One of the most enjoyable issues to consider this holiday season is what to put out for Santa Claus on Christmas Eve. In fact, one of the things we like about Christmas is that each family has its unique customs.

We’ve discovered that the Christmas Eve custom of putting out food for Father Christmas differs from area to region and nation to country. Isn’t it wonderful to get a sneak look at what the rest of the world is doing for our favorite redhead?

When we asked a couple of our friends what they put out for Santa, they generally said a drink and a snack. For Santa, the most popular options were a glass of brandy, whiskey, sherry, or milk. Add a mince pie, gingerbread, candy canes, or cookies to the mix. The majority of children leave a carrot for the reindeer.

Here’s what kids across the globe put out for Santa:

Children in Argentina put hay and drink out for Santa’s reindeer to keep them going while delivering all those presents.

According to reports, children in Australia leave a chilled glass of beer. It’s probably to assist with the heat, since it’s summer in Australia at the moment. He also receives a piece of fruitcake.

Pan de Pascua, a sponge cake with fruit, ginger, and honey, is given to Santa by Chilean children.

Risengrod, a delicious dish of rice pudding with cinnamon, is left out by the children in Denmark.

In England, Father Christmas gets mince pies and sherry. Although, in recent years, brandy, whiskey, or another alcoholic beverage have been substituted for sherry.

Delicious chocolate madeleine cookies are being left out by French children.

In Germany, children send letters to Santa Claus thanking him for the gifts he gives them. What wonderful manners you have!

Christmas lasts for 26 days and features 13 Santas in Iceland. The kids skip the laufabradud, which is a crunchy wafer that meaning “leaf bread.”

A mince pie and a pint of Guinness, an Irish favorite, are left out by Irish children.

Children in the Netherlands like leaving carrots, hay, and drink for Santa’s horses (no reindeers over there).

To win a present, children and adults read a poem in front of the Christmas tree. The youngsters then place piparkukas, a spiced gingerbread biscuit with white pepper, on the table.

Father Christmas gets a cup of coffee from the Swedish children, which is quite considerate considering the long night he has ahead of him.

For Santa, most American children choose milk and cookies.

What do YOU put out for Christmas, and where do you hail from?

The what does santa eat is a question that many people are curious about. Children around the world leave out cookies, candy, and other food items for Santa to enjoy during Christmas time.