Home Christmas Why do we give gifts at Christmas? | Gift-Giving Traditions 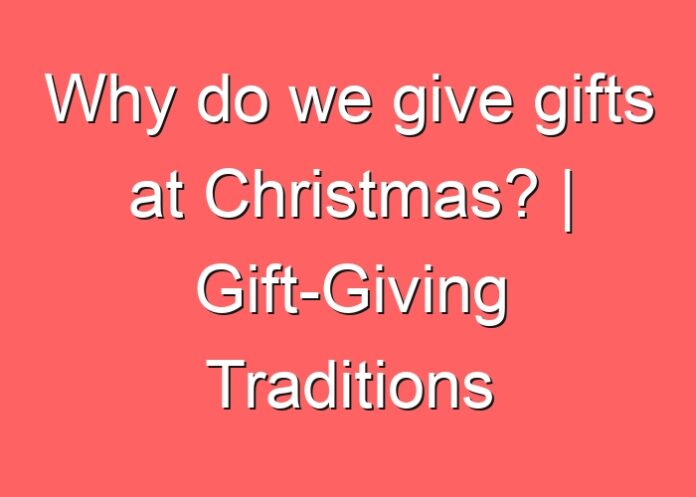 Christmas is the time of giving and receiving gifts. We give gifts to show our appreciation for friends, family, teachers, and others who have helped us throughout the year. What are some reasons why we gift?

Nowadays, we teach youngsters that giving presents at Christmas encourages them to be charitable. Spreading the message that giving is more essential and gratifying than getting gifts, but have you ever stopped to consider why we do it?

Let’s take a look at the history of giving presents throughout the holiday season and how it came to be such an important component of Christmas festivities.

What is the purpose of giving presents during Christmas?

What motivates us to purchase gifts?

The simple explanation is that we like doing so because we want to share something with the receiver that has made us think of them. However, as the conversation progresses, it seems to be more of a display of gratitude. Sending your kid to school with a box of chocolate to present to their favorite teacher is one way to thank those who have supported us during the year.

Gifting and reciprocity have long been a part of human social interaction and may be seen throughout history all throughout the globe. Giving and receiving presents is an opportunity to build social ties.

What is the purpose of exchanging presents during Christmas?

Some believe we exchange presents because of the three wise men who gave frankincense, gold, and myrrh to the infant Jesus at the beginning of human history.

Others might claim it’s because of Saint Nicholas, whose legend (as far as the world’s children are aware) is that he would leave oranges for good children and coal for bad.

When his parents died in 343 AD, the actual man was a bishop who donated his fortune to the needy, introducing the concept of distributing presents to people in his community during the holiday season.

When he died, the tradition of presenting presents in December was established. Santa Claus has become his legacy. Giving presents is a tradition that predates even Santa Claus. There is evidence that presents were distributed in pagan ceremonies at the winter solstice in December in pre-Christian Rome.

As we stated in our article on How To Celebrate Christmas Victorian Style, there was a long-standing custom in the UK to exchange presents on New Year’s Day, but as Christmas festivities became more popular throughout that century, gift-giving was moved to Christmas Day.

Under the tree, there are piles of gifts.

What is the purpose of putting gifts beneath the tree?

This is a very recent Christmas custom. Christmas trees were not widely used in Europe until Queen Victoria embraced the formerly German custom in 1840, and they grew in popularity throughout the Victorian era.

People have been erecting trees and adorning them in their houses since then, and in certain cultures, they have also placed their presents underneath them.

Although it is not customary in certain nations to put presents beneath trees. In France, for example, it is customary for youngsters to leave their shoes outside to be filled with gifts.

When do people in various nations unwrap their gifts?

In the United Kingdom, we are used to meeting on Christmas Day to exchange presents as a family. Different nations, however, unwrap gifts on different days.

The 6th of December is Saint Nicholas Day in several European nations, such as France and Poland. Instead of opening gifts on Christmas Day, they do so on this day.

On Christmas Eve, several nations in Europe (such as Germany, Austria, and Norway) and South America (such as Argentina and Brazil) unwrap gifts.

The following countries are the most likely to unwrap gifts on Christmas Eve:

In other nations, the Epiphany, which falls on January 6th, is a major day when presents are exchanged. In Italy, depending on whether they were nice or bad, children are given a stocking of sweets or coal.

New Year’s Day is important in Greece, with children getting presents.

So now we have a better understanding of why we give presents at Christmas. Is there anything you’ve read that has shocked you?

Why is gift giving a Christmas tradition?

What do gifts symbolize why are gifts given?

Gift giving is a cultural practice that has been around for thousands of years. The most common reason given for gift giving is to show appreciation and gratitude.

What is the purpose of giving gifts?

The purpose of giving gifts is to show someone that you care about them and want to make their life better.